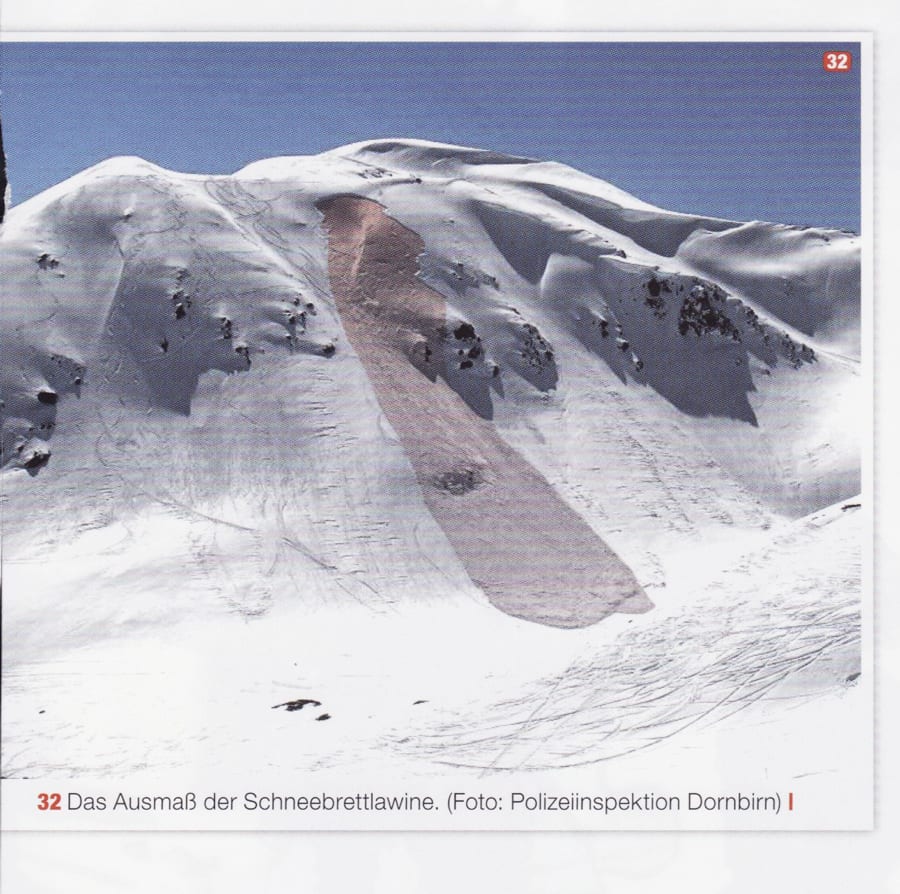 Anyway, I try to translate the relevant reports for St. Anton and the Arlberg ski region. This overview should help you to avoid potential dangerous situations and it shows how important it is to wear an avalanche transceiver and other avalanche rescue equipment even close to the piste.

Details:Two skier climbed from the Rüffikopf cable car in the direction of the Wöster. From the ridge line they had to traverse a 30° – 35° degree slope. Soon as the second skier entered the slope he released a 100 meter wide slab snow avalanche. The skier could release the avalanche backpack and stayed on top of the avalanche (no injuries).

Analyse: Early winter scenario, after several days with snow fall, strong wind and low temperatures the fresh slab snow could not bond with the older layer underneath. At this time of the year this run is not frequently skied. So there is no compact snow underneath.

Details: A group of skiers skied the very top part of the Schafgliger and lost the orientation because of flat light. One boarder went ahead to find the way. The other people followed him a little later and released a very little slab. This very little slab snow avalanche was enough to bury this person under 1,6 meters of snow. The rest of the team did not even realize that the first person in front was buried and skied all the way back to St. Anton. The boarder was wearing an avalanche rucksack but because of the terrain trap the snow moved just over him. The person got rescued but could not be reanimated anymore.

Analyse: A few days before the accident this group skied the Schafgliger (very top part of Törli)  with a guide from St. Anton. But at this day there was excellent visibility and it was easy to find the way back to the piste. In bad visibility many people get lost in this terrain.

Details: The skier came from the top of the Schindlergrat chair lift. Just before the Valfagehrjoch the skier traversed in to the Schindler west face. A little bit below the wind blown part at the ridge line the skier triggered a 10 meter wide and 70 meter long slab snow avalanche. The skier used a avalanche airbag and could trigger it successfully. The skier wasn’t buried maybe because of using an avalanche airbag.

Analyse: Early winter scenario, lots of fresh slab snow and triggered on the convex part of the terrain where the snowpack is very unstable.

Please see how close it is to the piste! 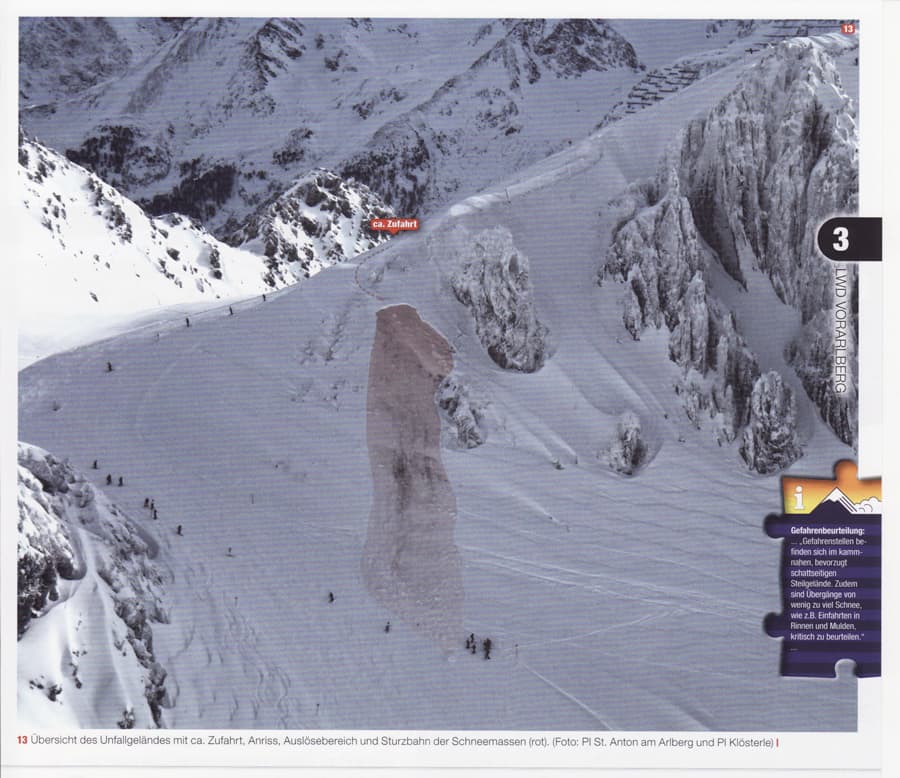 Details: 3 Skier where traversing from the Madloch chair lift in the direction of the Gamsroute. Their traversing track was to low so they could not enter the strong frequented track a little higher up. The first skier triggered the avalanche in very steep terrain. The skier could trigger the avalanche rucksack and wasn’t buried.

Analyse: This is a typical mistake in the Arlberg ski resort. People are starting a traverse and loose because of any reason the height from the traversing track. Suddenly they end up to low and in super steep rocky terrain. 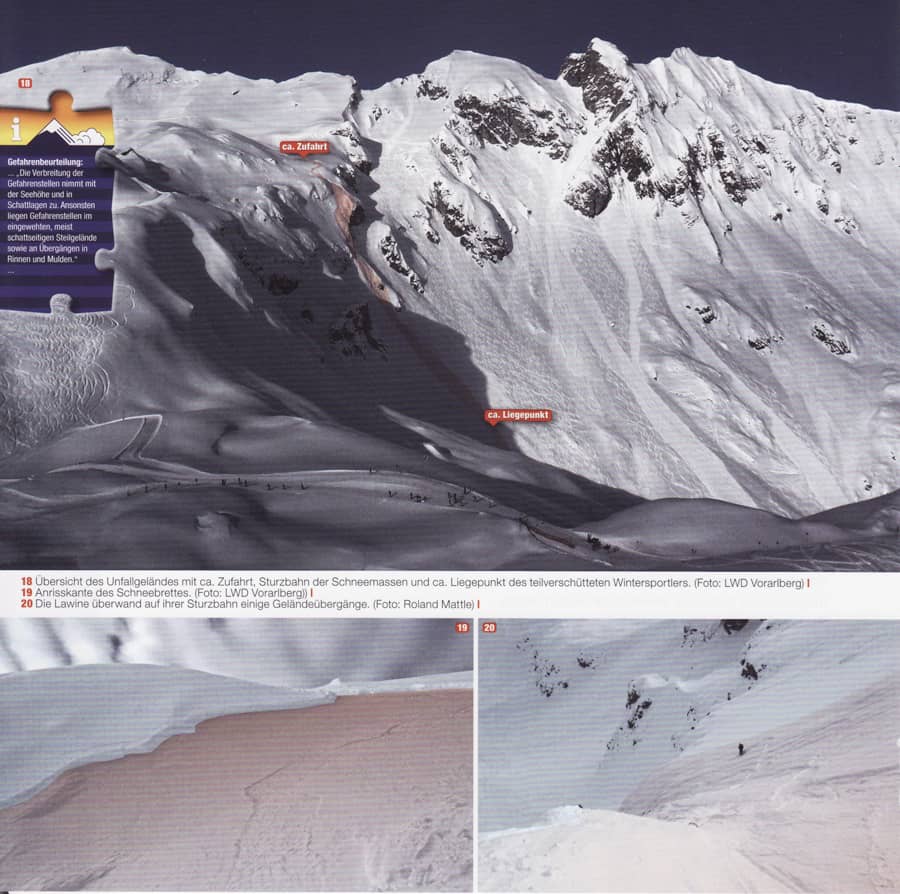 Details: Father and son skied from the Madloch chair lift over Gamsroute around the corner to the Höll (hell). Just after the top the father released a slab snow avalanche and got moved down over 570 meters. Again, the skier could trigger an avalanche backpack and was just partly buried. The son took the skies off and tried to climb down with the transceiver in the hands till the moment he got stuck. The son got rescued by the helicopter and the father got rescued by the mountain rescue in Lech.

Analyse: The Höll (hell) in Lech is hard core super steep terrain. Every little mistake in picking the right line is a complete disaster. In this case the line is much more further skiers right. Anyway, for this avalanche situation in combination with a father and son constellation this run had way to high risk. 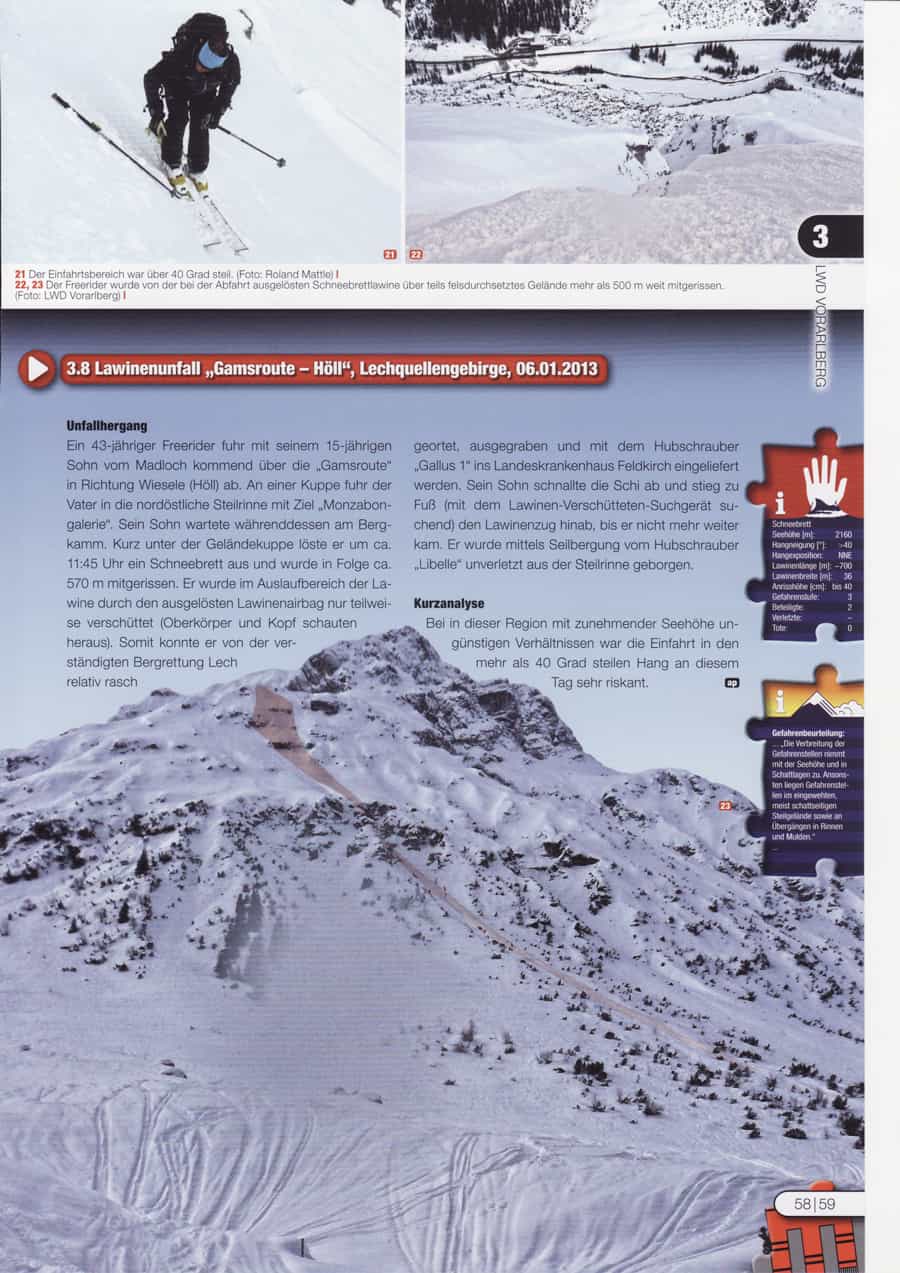 Details: A team of three skiers traversed below the Roggalspitze with safety distance. They triggered a slab snow avalanche. Two of the team got moved down for 200 meters. And again, they could trigger there avalanche rucksack and where just partly buried. 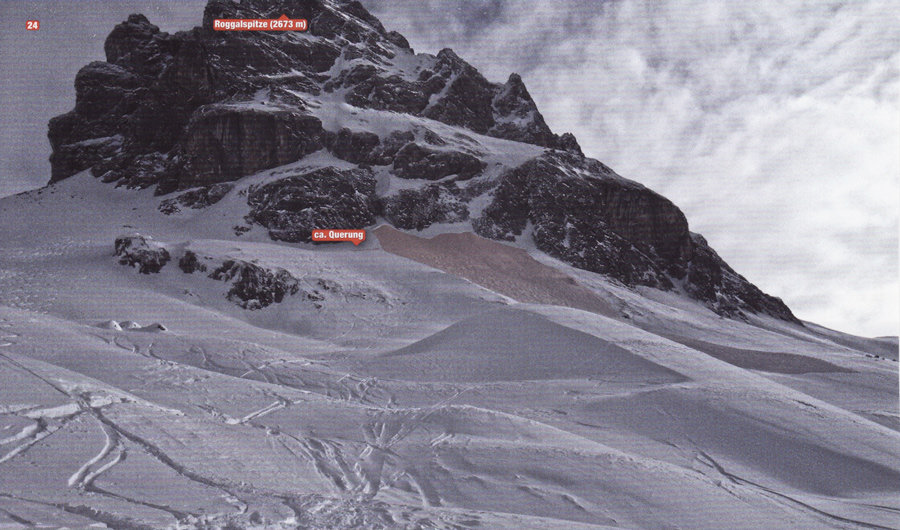 Details:A lokal skier form Vorarlberg skied in bad visibility and snow storm very close to the piste number 3. The person triggered a very little slab and got partly buried. Head first in the snow for about 1, 2 meters. The mountain rescue found the person just 10 meters close to the piste and could not help him anymore. Both legs where visible on the snow surface. But avalanche snow is like concrete and so the skier could not help himself. The person could not be reanimated. 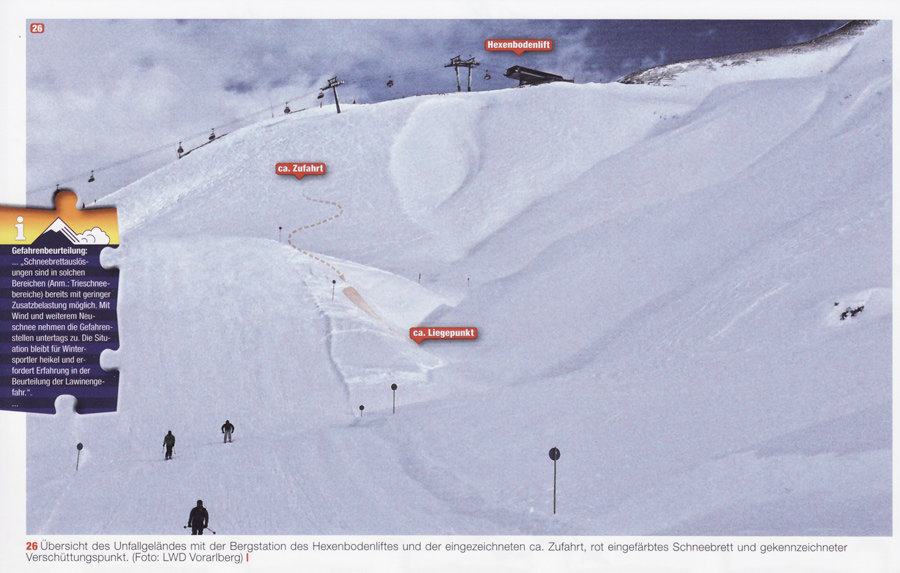 Details: A skier skied from the top station of the Hexenboden lift in to the direction of the Pazieltal ( Valluga).

Just before the end this person released a slab snow avalanche and buried a person 100 meter further down completely. This person was not wearing a avalanche rucksack and got buried 1,6 meters. Because of the very quick transceiver rescue by a local guide the buried skier was not injured and could ski himself back to Zuers.

Analyse: At the very last part of the Pazieltal are many convex forms in the terrain which are quite often tiggerd. 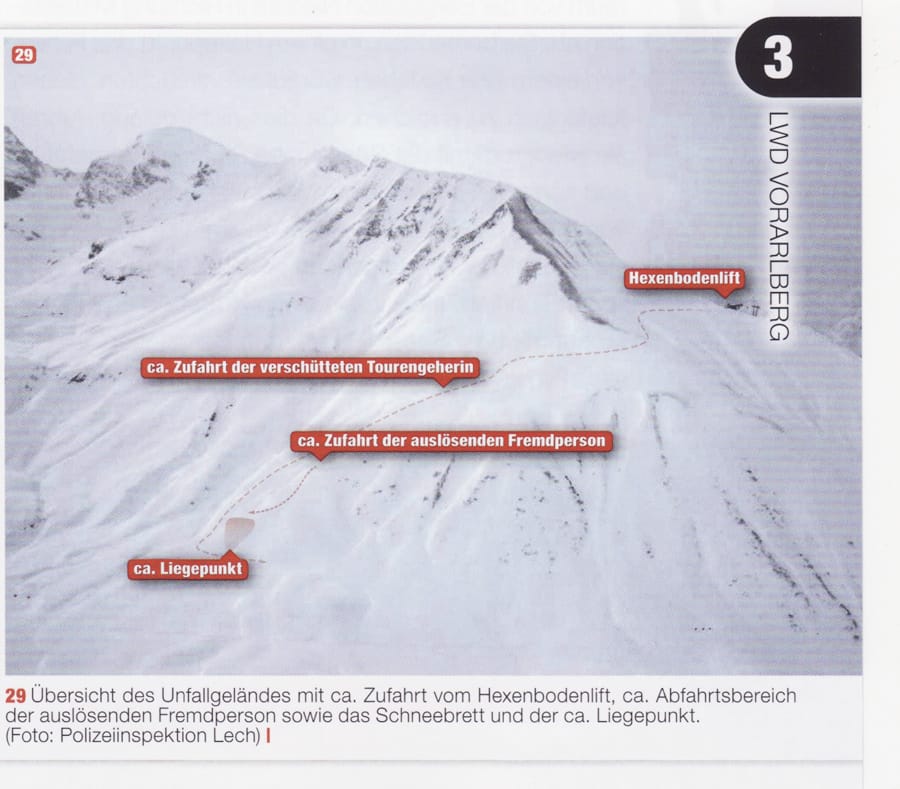 Details: A snowboarder climbed up the Maroikopf. Just before the summit he moved hard to the left and skied the north east face of the Maroikopf back to the Albona chair lift. After he skied about a quarter of the run the person triggered an avalanche which broke about 80 meters above him. The person was using an avalanche airbag system and was just very little buried and not injured at all.

Analyse: This off piste run from the Maroikopf moves many times a season. It is not a place to ski!